Upon the orchid painter

The ophrys apifera is a plant belonging to the family of orchids which, to make its pollination process more effective, has made its flower a vegetal and abstract copy of the abdomen of females of some species of hymenoptera. The case has it that the specific insect to which the plant subject turned is now extinct. The seductive orchid, returned by necessity to a more cautious, at least functional, self-pollination, retains in its formal expression the unique portrait of an ancient and extinct insect. 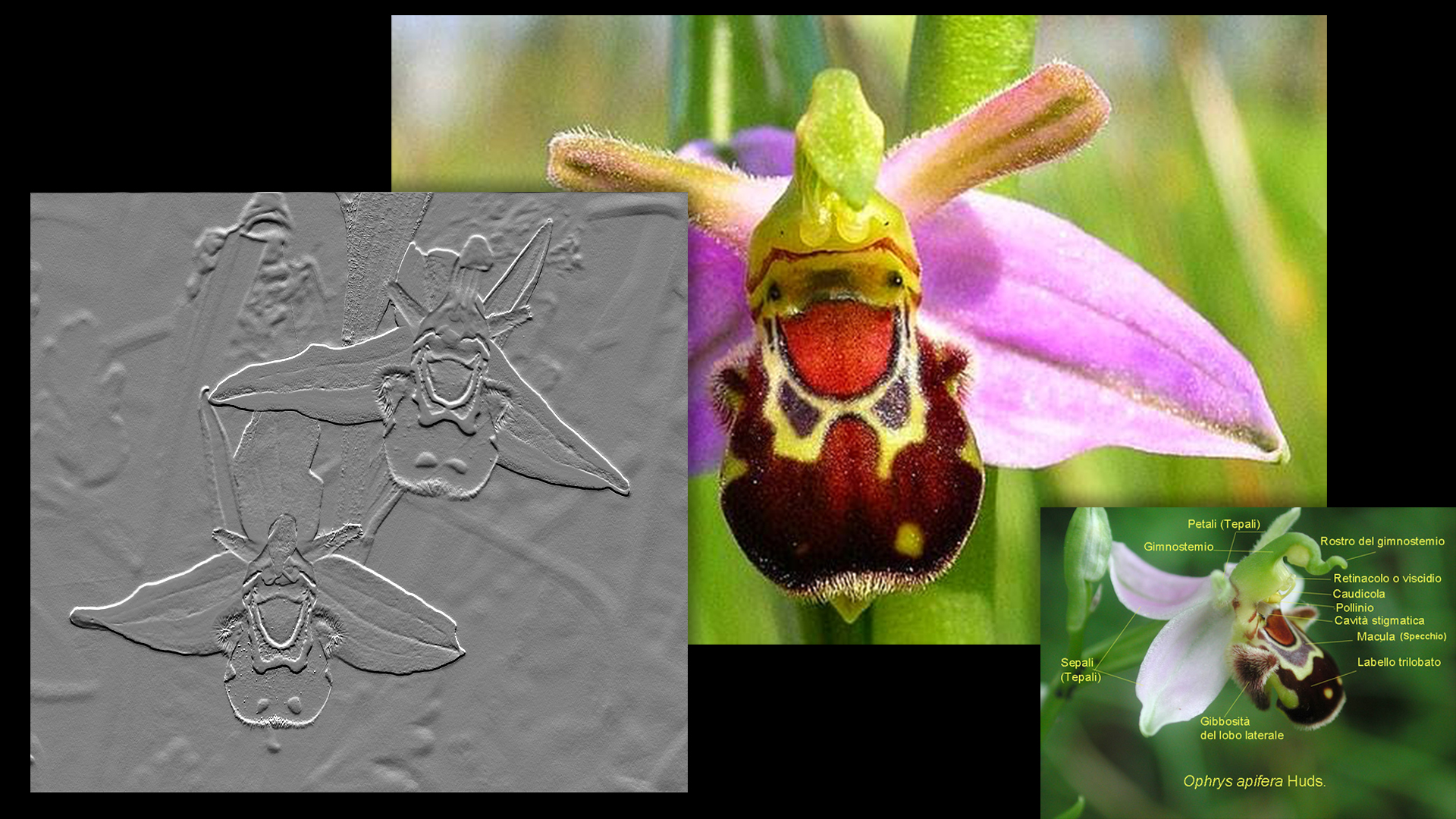 The idea that a plant can produce, without access to vision organs, a mimetic and functionalized form is, to say the least, destabilizing. Accustomed to a concept of nature and non-human as alien and deaf to interactions with our sentience, the very concept of a portraitist orchid triggers a series of contrasting emotional reactions. Reactions that lead us to reaffirm the need to rethink an old protagonist in the history of philosophy and aesthetics: nature.  At the heart of any respectable media discourse and of the greatest generational anxiety since Nostradamus, nature is once again a fundamental entity with which to deal.

But what is nature?
Let’s start from the clichés: I challenge any western human mammal, when asked about the concept of nature, not to think instinctively of a forest, a prairie, mountains or an uncontaminated maritime panorama. Nothing bad, you might say. But let us  better understand why this logical and visual connection is so deeply rooted and shared, as well as subtly dangerous.Nature, as an entity or personification, has[1] experienced varying fortunes and considerations (I will limit myself here to Western culture). From the Roman raw material to be tamed , to the indifferent leopardian stepmother, from the creator of the romantic sublime to the entity-victim to be safeguarded and defended, nature has lived in recent centuries (if not millennia) a narrative that uses opposition with the human being as its primary engine. It is not by chance that, always continuing with a necessary generalization, the intuitive image of nature, of which we spoke before, never includes a visible anthropization, which could lead to a collapse of a stereotyped idea of ‘incontamination’.
But when did this process of strong separation take shape? The culprits are many, the homo sapiens (wise, rational and certainly not naturalis), has made of his being cogitant its main motive identity, in contrast (hierarchized) with all that res extensa (animal and inorganic), to his service. Moreover, even that egotist of the Creator did not go too easy on us, we read in Genesis 1:26: “And God said: ‘Let us make man in our image, in our likeness, and dominions over the fish of the sea and the birds of the sky, over the cattle, over all the wild beasts and all the reptiles that crawl on Earth”. In short, from these premises one could only expect a hegemonic narrative based on the separation and domination of nature.
All right, perhaps there is no need for this hatred against the first homo sapiens (and much less against the Creator), but the history of the relationship between man and nature (in the West, we should remember it) is the story of a collective and shared narrative. And, if the narrations make the story they tell (the medium IS the message!), that of the homo sapiens is certainly not among the happiest for the subject-nature.

The fifteenth century in Italy, and then in Europe, gave a further input to the narration of the separation, codifying the season, precisely, of humanism. Far from defining humanist reflections as anti-natural (or rather, anti-eco-logical, using an ante litteram term), it is undeniable, however, how the galloping anthropocentrism of those seasons defined the unrecoverable gap between man and other-from-human, that we still live today. The humanist narration perceives in animality (except for some of its metaphorical uses, and almost exclusively Christianized) and in the concept of Nature something similar to the demonic and deviant. Interesting at the same time is the reaffirmation of the naturalness of man, redefined and made synonymous with righteousness. The counter-natural, highly entrenched syntax identified (and identifies) any trend considered not to be natural, where by natural we mean the ethical-moral dimension. An antinomy, therefore, soon resolved: naturalness, in this declination, is nothing more than the projection of a codification expressly cultural (and therefore exclusively human), on a universal substratum like that of Nature, aimed at the totalitarian legitimization of one possible narrative.

Heir to the anthropocentric approach, the Enlightenment identity is surely a central stage of the human-non-human relationship. The universalizing and encyclopedic plant defines the nature and the other-from-human as primary subject of scientific investigation.
These years are of fundamental importance for our discourse also for another reason: the birth of aesthetic discipline. The sectorialization of a branch of philosophy that deals with the relationship between man and vision (art, first of all), automatically generates reflections on the perception of the non-human, of the product (artificial artistic, for example) and, of course, of nature.
The traditional aesthetic has therefore a strong rational and anthropocentric approach: the world becomes a visual stage with which man dialogues, almost always as a protagonist.
However, aesthetic discipline has in itself an interesting and unexpected conceptual potential. So far we have gone into an improbable and jagged micro-history of anthropocentrism, and I believe that the aesthetic factor can become an explosive device of anti-anthropocentric growth. The aesthetic experience concerns, as already said, an object foreign to the subject it perceives. For the sake of convenience and scope of analysis, the non-humanity in question will exclusively concern nature here.
Here we begin to enter into the more specific coding of the idea of nature as popularly considered: the traditional aesthetic setting (the kantian one, as we understand it), read in the natural a universal component; a narrative that defined its status as different from human (which, conversely, is cultural, progressive and changeable) and therefore lived in itself a cyclical and a-historical component. On this basis it was in fact simple for the so-called romantic aesthetic to conceive in the expression of natural beauty a perfect landscape on which to project subjective perceptions. Nature, though protagonist of analysis and romantic aesthetic reasoning, perpetuates the dimension of subjectivist separation, where it remains not only as other from us, but also as a mouldable substratum finalized to emotional projection (or induction).
In short, nature as a foreign subject, and as the plastic and de-anthropized postcard that was mentioned at the beginning owes much (if not everything) to this aesthetic codification that, now almost genetic, we Westerners carry with us.
Well, you know where I’m going with this: the absolutist anthropocentrism has led to the (increasingly concrete) possibility of destroying every bios (paradoxically, including humans). The millenary conviction that the subject nature is different from us (precisely, a subject), has decreed the ethical possibility of exploiting it, capitalizing it and, consequently, destroying it.
Such model has– today more than ever –  known strong oppositional movements that, however, have seen, especially in their early stages, a reiteration of a disjointed model, perceiving nature (and the animality in the specific) as, again, subject other, This time in need of a human and, let us say, even a little fatherly protection.
What then is the revolution we need? And again, why can the aesthetic factor be the first engine of this revolution?

The logical turning point to which I refer is that of post-humanism. Like every post moment in the history of recent thought, its basin is labile, jagged and always in flood. However, the starting point is clear: the man and the culture that sanctioned his universal centrality are a problem, and not just. We must use liminal methods of investigation that will enable us to mend that millenary gap between man and other self. The very idea of a disconnected relationship between subject and object (here declinable in man and nature) is in itself extremely partial. [As Roberto marchesini (to whom I owe a lot for this text) says, there are no subjects, but only relationships: every dialogical process that involves a reification of one of the agents involved is denying the exchange value of the relationship itself.] Trying to be clearer and exemplifying the concept with the object of our analysis: to conceive nature as other from itself (and therefore making it object), denies that mutual process of influence and mutation that man experiences in his life in and with nature, and vice versa.
Leaving behind the warm and welcoming anthropocentric sensation is complex and apparently not convenient. Going beyond oneself (as a cultural species) is a process of de-strengthening to all intents and purposes. De-empowering ourselves as humans through technology has made us dependent on it: it is a fact, where addiction is not charged of a judgment value. In the same way, going beyond ourselves means revealing our own dependence on others, and thus making ourselves more related to the world.
It is precisely on this conceptual assist that the role of aesthetic perception becomes the perfect springboard for interaction related to nature.
Gernot Bohme, a German philosopher in 1937, is interested in what he himself calls atmospheric aesthetics. Atmospheric aesthetics studies the proprioceptive processes of man in correlation with the environment. So far nothing too different from traditional aesthetics, but, continues Bohme: «Aesthetics as a theory of perception discovers a fundamental trait of nature that escapes natural science, in any case, modern science. In perception nature meets us as perceptible, it is, with the Greek term, aistheton» (Gernot Böhme 1995).  The’perceptibility’ of nature in Bohme is fundamentally corporeal (where the body is antithetical to a rational discourse). The similarities with the Sublime model are different, and the contradiction with the anthropocentric discourse does not frighten me: through the own-bodily perception (the thrill of the sublime is in all respects a bodily sensation)atmospheric aesthetics can add a very fertile enzyme to ecological analysis.
Nature, which at this point I would call bios,[2] lives in the atmospheric aesthetic a possibility of’consideration’ finally complete. A de-subjective model can in fact make us not more focal point, but part of a conceptual circumference from which to look at the world in the paratactic sense.
In contemporary aesthetics in general, however, there is increasing emphasis on the role of the body and the environment in building our cognitive architecture. Man, an integral part of his own environment, builds his own experience in inevitably relational terms, involved as he is in the matter of the world. Starting from the study of classical authors, such as John Dewey, and also thanks to the contribution of cognitive sciences, the aesthetic is therefore one of the fields of study to which we should look look with interest to mend the relationship with nature, to build a solid theoretical system in support of our naturalness.

Our orchid friend no longer needs to be called a painter. It does not require anthropization, but its enigmatic artistic abilities live on an alien dignity.

[1] A process, that of personification of nature and of the entities that live it, shared and diffused in almost all cultures.

[2] The term, central in the bio-centric reflection of Roberto marchesini, includes every ‘organic’, extending the field of the natural and then bringing it closer to the human.